Sign up for the newsletter + my hormone balancing e-course.

Adrenal fatigue is a health buzzword that is commonly misunderstood, even among alternative practitioners. Adaptogenic herbs and adrenal glandulars are the most commonly prescribed solutions. However, the truth is that adrenal fatigue is a whole-body problem. While adrenal supplements like adaptogens are effective, it is not a long term solution if the root causes, like chronic stress, lack of sleep and inflammation are not addressed.

Embarrassing admission: I was once dependent on adaptogenic herbs for years and I am grateful that they were so helpful during those stressful years in graduate school. Even though it is natural medicine that is quite effective, it was still a pill that I used to cover up what I did wrong. Eventually… they lost the effectiveness and became a clutch. In this post, I explain why.

Dr. Wilson’s model with 3 stages of adrenal exhaustion is based on 50 year old science. While it is a good analogy to life, it is not scientifically accurate.

The adrenals do not simply fatigue. While adrenal fatigue is a real problem that is actually recognized in conventional medicine, the term “adrenal fatigue” is a misnomer. The adrenal fatigue that we refer to is called the hypothalamus-pituitary-adrenal (HPA) axis dysfunction. It is recognized in biomedical literature as a contributing factor to several mental illnesses, metabolic syndrome, infertility, sleep disorder, IBS, and even overgrowth of the wrong gut bacteria.

“Adrenal fatigue” in conventional medicine refers to Addison’s disease, or when there is autoimmune attacking the adrenals, which can cause it to wither and die. When that happens, the treatment could be to replace the adrenal hormones as well as to stop the autoimmune attacks.

Adrenal Fatigue or HPA axis is actually a miscommunication between the brain, the pituitary and the adrenals.

Now, let’s step back to a little physiology. Hormones are a means in which different cells communicate with each other through the blood stream. Every hormone is produced and secreted into the bloodstream. When it reaches the target cell, the target cell will have the right receptor waiting for the hormone. The hormone has molecular sex (binds) with the receptor, so that it communicates the hormone’s messages into the cell.

Hormonal problems, including HPA axis dysfunction, could arise from 4 different issues with these processes, following the mnenonic PTSD – production, transport, sensitivity and detoxification (which I got from Dr. Sara Gottfried).

T stands for transport. If somehow the hormones are produced, but are not transported correctly, then the target cell doesn’t receive the message that would be communicated by the hormones.

S stands for sensitivity. Sometimes the hormone receptor can be blocked, so the message doesn’t get to the target cell.

D stands for detoxification or destruction. When the hormones are used, they need to be destroyed so we don’t have trouble with excess hormones.

When someone has HPA axis dysfunction, they have a problem with production, transport, sensitivity and detoxification of one of the hormones in the stress response system.

Now that I have seen numerous 4-point salivary cortisol test results, this is how I look at it when I help my clients. It is critical to consider these lab results in the context of their stress and lifestyle factors.

What high cortisol, or “stage I adrenal fatigue” really means.

The so-call stage I “adrenal fatigue” is when someone has very high cortisol levels. The person could simply be experiencing acute stress, which results in high cortisol.

Not only is high cortisol a problem, but an elevated levels of other hormones in the HPA axis may be unhealthy. The CRH receptors in the pituitary can also be resistant to CRH because of high cortisol levels. But CRH levels can be elevated due to stress and infections. Because CRH also has other roles than to stimulate ACTH production, elevated CRH is responsible for many stress-related diseases, like increased inflammatory symptoms and suppression of thyroid functions.

High cortisol could be a problem if it stays high. For many people, high cortisol results in hormonal imbalances and weight gain in the form of muffin tops. High cortisol relative to DHEA typically means that the body is in a catabolic state.

Now, when someone has reduced cortisol levels than is healthy, as it what looks like “stage II or stage III adrenal fatigue” there could be a few possible problems.

The adrenal cells are not producing enough cortisol. Often, this is because of mitochondrial dysfunction, because the process of generating steroid hormones starts in the mitochondria.

Also, factors such as inflammation can cause the ACTH receptors on the adrenal cortex to become less sensitive to ACTH, so the adrenals are not pumping out as much cortisol as it should. In short, inflammation may cause low cortisol.

Low cortisol could be a problem because cortisol has many important functions. For example, it keeps blood sugar at a healthy level, so someone with low cortisol may have symptoms of hypoglycemia, like waking up wired at 3 – 4 AM. In addition, cortisol helps to keep immune responses reasonable, so many people who have a flare-up of inflammatory symptoms typically have very low cortisol.

It is therefore very important to have healthy cortisol levels, as well as all the other hormones. While adaptogenic herbs can really help with HPA axis functions and mitigating many stress-related symptoms, it is also important to address the stress that throw off the person in the first place.

Because adaptagenic herbs usually normalize the entire HPA axis and may stimulate the immune system, most people will feel better, at least initially, on adaptogenic herbs. If problems like lifestyle factors, day-to-day stresses, poor sleep, sources of inflammation, metabolic malfunctions like mitochondrial dysfunctions are not addressed, then adaptogenic herbs will not be helpful in the long run. The adaptogens can eventually become a clutch that treats the symptoms and keep the symptoms at bay rather than the real solution to the root cause. 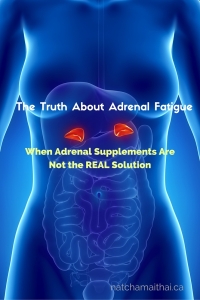 What I do to help an “adrenal fatigue” client:

Interested in figuring out your HPA axis dysfunction? Click here to book an initial consultation with me.